Cold Calling Back from the Dead? 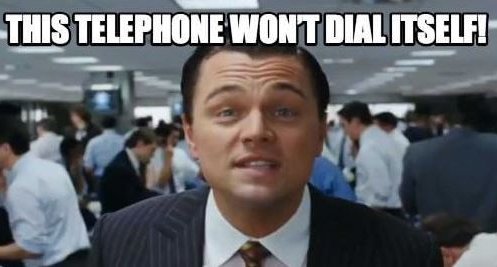 By Wendy Weiss, The Queen of Cold Calling™

Cold calling is dead… At least that’s what people say. According to a new study by the RAIN Group Center for Sales Research, however, both buyers and sellers agree that cold calling is still one of the most effective ways to reach out and begin conversations with new prospects.

The RAIN Group studied 488 buyers in over 25 different industries who are responsible for $4.2 billion in purchases and 489 sellers in 26 different industries. They found that many of the myths that sales professionals believe about prospecting are dead wrong. No surprise to me.

Another myth they examined is that since it is harder to get prospects on the telephone, the phone is no longer a useful tool for prospecting. What they actually found is that the phone is essential for prospecting – especially when targeting high level executives. According to the buyers they studied: “… 70% of sellers connect with them and generate meetings using the phone.” The RAIN study further found that according to sellers: “…of the 15 most effective outreach methods… Using the phone represents 3 of the top 5 statistics, including making phone calls to existing clients, past clients and new contacts.”

The importance of the telephone and “oral communication” is also borne out by a study done at the University of Chicago, Booth School of Business. From an article in the New York Times, Business Day, June 27, 2015:

“New research shows that text-based communications may make individuals sound less intelligent… than when the same information is communicated orally. The findings imply that old-fashioned phone conversations or in-person visits may be more effective when trying to impress… or perhaps, close a deal.”

In addition, while the idea that “cold calling is dead” gets a lot of airtime, the RAIN Group study found that according to both buyers and sellers: “…cold calling works and it still one of the most effective ways to generate initial sales conversations.”

Bottom line, what you need to know: 1.) You need to engage with prospects on the telephone and, 2.) Contrary to popular myth, cold calling works.

@jasoncapital Have you heard the story about the 50 pounds of clay? ♬ original sound – Jason Capital

Saul Alinsky, the famous Social Justice Warrior, wrote a book in 1971 called “Rules for Radicals” in which he lists 13 tactics to use in uniting low-income communities, or “Have-Nots”, in order for them to gain – Read more…