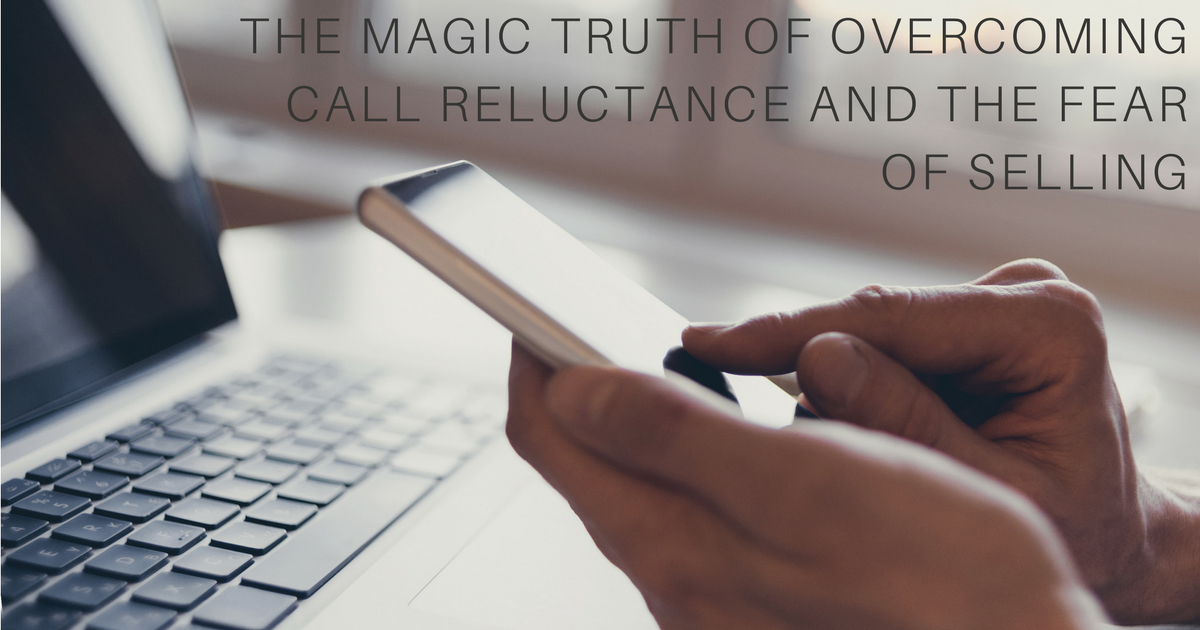 My friend Rory Vaden wrote this on his blog and it was so good I had to share it here  I recommend subscribing to everything he writes if you’re in the sales game – he’s absolutely terrific.

Being in sales can be tough.

On any given day, you deal with objections, rejections, and typically some level of self-doubt wondering if you have what it takes to ultimately be successful.

There is a pressure to produce that can sometimes be debilitating and discouraging.

When we think about what it takes to sell someone, we can get overwhelmed and paralyzed with fear.

This fear to a salesperson is commonly known as call reluctance.

But there is only one time when you feel fear, and that is when you are thinking about yourself.

Fear is so self-centered.

Fear shows up when it’s all about you.

But there is one magic strategy to eliminating fear, call reluctance and creative avoidance when it comes to selling.

It’s to shift the focus off of yourself and to instead be focused on the people you’re trying to help.

Or as Southwestern taught me years ago…

“It’s hard to be nervous when your hearts on service.”

It’s hard to be scared when we’re thinking only of helping people.

It’s hard to have fear when we’re focused on being selfless.

We don’t feel the fear because we’re not focused on how we’re feeling; we’re only focused on who we’re helping.

It’s hard to be nervous when your hearts on service.

This is something that we, at Southwestern Consulting, refer to as “Servant Selling.”

It’s a completely different and counterculture way to think about selling.

Because you’re thinking as much or more about serving as you are about selling.

It shifts your focus away from all the pressure that sometimes shows up when we think about selling to people, persuading people and influencing people.

And we instead additionally focus on helping, educating, and serving.

And that makes a difference because in any given sales presentation…

You may or may not make a sale; but you can always make someone’s day.

You can always concentrate on making people smile.

You can always concentrate on brightening up someone’s day.

If you’re struggling with call reluctance, fear, or creative avoidance then perhaps it’s because you’re putting too much pressure on yourself to sell, persuade, and influence.

If that’s the case then don’t think about it that way.

Think of yourself as a perpetuator of happiness who is also solving people’s problems.

Think of yourself not only as a salesperson but also as a servant.

Because it’s hard to be nervous when your hearts on service.

Say This, Not That